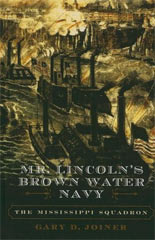 Gary Joiner is part of a new breed of historians populating the study of the Civil War. He is the nation’s leading expert on the Louisiana Red River Campaign and has given that region of the country a much needed anchor in Civil War historiography. Gary has become prolific in his publications, discharging years of research in a relatively brief period of time and he has recently undertaken a very prestigious editorial function with the University of Tennessee Press. He holds a faculty position at the Louisiana State University campus at Shreveport—his tours of the Red River in Louisiana are not to be missed.

Participants in BGES programs would recognize the narrative as a standard introductory briefing from historian Parker Hills. Both Joiner and Hills understand the role of the inland navy to the United States’ success in restoring the Union. This is an excellent primer that expertly and efficiently conveys the development and utilization of the inland water fleet from 1861 through the partitioning of the riverine geography into naval districts. The narrative introduces every major player and every vessel; but leaves plenty of opportunity for more detailed treatments. The presence of the navy in any number of battlefield operations from Fort Henry, through Shiloh, New Orleans and the Vicksburg campaign are not neglected.

The book is a lightweight at just 198 pages inclusive of photographs, end notes, an extensive bibliography and index. This is part of a series that originated with Scholarly Resources, a company that has subsequently been acquired by the current publisher. Unfortunately, the series is afflicted by the cumbersome baggage of a robust—indeed obscene price tag. The hardback at $70 is not likely to see a second printing and the soft back at $26.95 is fully priced for a book of such size. Having said that, the soft back is in the National Park Bookstores and selling well–it should. This is a good book.

It is a tribute to the author that in just 8 brief chapters, he is able to share so much. I knew most of the information before opening the book; however, I enjoyed the narrative and when Joiner reached the Red River Campaign, I was a naïve student learning about Joseph Bailey who received the Medal of Honor for his innovative and critically important execution of a damming project "The Bailey Dam" at Alexandria, Louisiana. Without Bailey’s innovation the Union fleet would have been lost in the low water of the Red River.

A second revelation was the insight he provided into Admiral David Dixon Porter. Porter is frequently misunderstood and has been labeled a braggart. Porter was an innovative and aggressive officer whose willingness to expose his vessels to destruction in support of difficult army land operations and objectives promised great results. His personality was well suited to the needs of US Grant and he was a significant contributor to Grant’s ultimate success. This is not one of Joiner’s conclusions but the evidence is clear—Porter and his Brown Water Navy was a force multiplier. Ellet’s Rams were an additional independent force—Chester Hearn has provided the definitive work on that aspect of the western fleet.

The war in the west was certainly complex and luck favored the daring. The innovation of officers from Captain J.P Rodgers to the engineers like James Eads and Samuel Pook made Lieutenant General Winfield Scott’s Anaconda Plan look prescient.

For people looking for a comprehensive overview of inland naval operations this book is a worthy special addition to studies such as Rowena Reed’s Combined Operations in the Civil War.

[box]How to Purchase: Links to sellers are on the Amazon.com website.[/box]