Andrew Jackson. Our nation’s seventh president. Known as “Old Hickory” for his legendary toughness—though the original nickname coined by those under his command was simply “Hickory.” That’s one of many interesting facts about this favorite son of the South and one of American history’s more colorful figures. Here are 11 more. 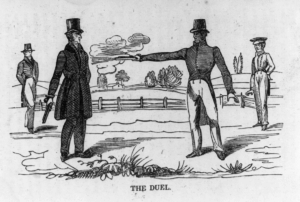 1. Jackson’s birthplace is a mystery. He claimed to be born at an uncle’s home in South Carolina, but the common belief is that assertion was made to advance his political career. Evidence suggests he was actually born in North Carolina.

2. As a 13-year-old, Jackson served as a messenger for his local militia during the Revolutionary War. Captured by British forces, he became a prisoner of war. A scar across his face came from the sword of a British officer, who cut him when he refused to shine the soldier’s boots.

3. Jackson worked several jobs after the war, including as a saddle-maker at the age of 14.

4. Jackson was Tennessee’s first member of the U.S. House of Representatives, elected in 1796.

6. Jackson ran for president for the first time in 1824. One of five candidates, he lost the election to John Quincy Adams, despite receiving the most popular votes.

7. Jackson was the first president to be targeted in an assassination attempt. D.C.s famous humidity may have saved him. Richard Lawrence’s attack on Jackson was thwarted when two different guns misfired. Historians believe humid conditions likely caused the malfunctions.

8. Jackson was in a number of gun duels during his lifetime. In one he was wounded, but managed to shoot and kill his opponent. Surgeons were unable to remove the bullet from Jackson’s body, as it was lodged precariously in his chest. The bullet remained there for the rest of his life.

9. Jackson never had any children of his own, but he adopted three sons and was the legal guardian for eight other children.

Learn more about this fascinating man on the upcoming BGES tour, “And the British Kept A Comin’,” being led by foremost historian Neil Mangum on March 31-April 5, 2019.