Skip to content
North Anna–Ox Ford County Park is BGES’ Flagship operation with a relationship of more than 20 years. To date, BGES has completed three sign projects at this pristine county-managed battlefield park. We also have completed a site brochure, sponsored a regional map of historical sites, and are consulting on interpretation near Gaines Mill/Cold Harbor. A visit to North Anna includes 23 signs divided between a Blue Trail (13 signs) and a Gray Trail (10 signs). In 2014 the BGES received the Patrick Henry Award from the Hanover County Historical Society for its contributions to the community. 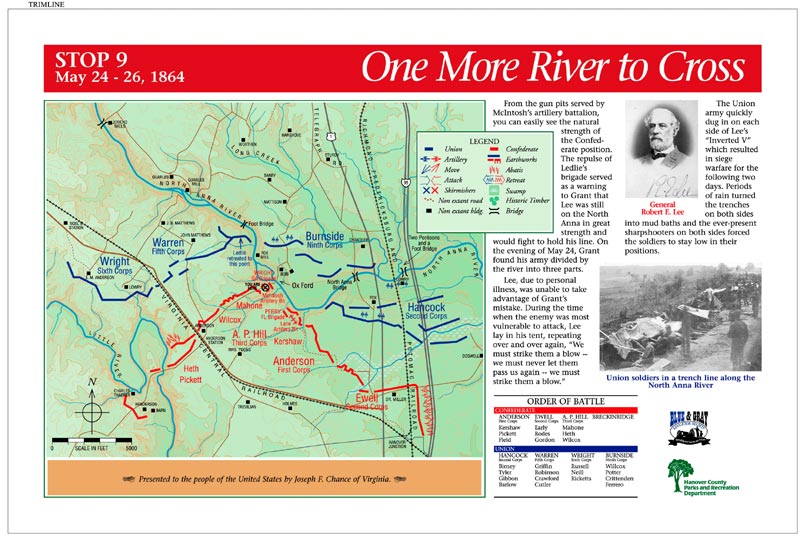 BGES initially placed 10 interpretative markers in 1997–1998 along what today is the Gray Trail, which snakes along the Confederate defensive works down to the point of Lee’s inverted V at the crossing of the North Anna River. Here Union assaults were dashed against the formidable earthworks. The signs were designed by park historian Michael Miller. The signs were fabricated by Michael Beard of SunSyne Products in Johnson City, Tennessee.

Ten years later, BGES renewed the fading Gray Trail signs with a higher quality ink. Later, when additional acreage was acquired along the Federal camps and the field of the Union’s ill-fated advance, the BGES installed 13 additional signs in 2014 along what is now the Blue Trail (which is also a state birding trail). Michael Beard did five of the signs, and Scott Williams did eight. 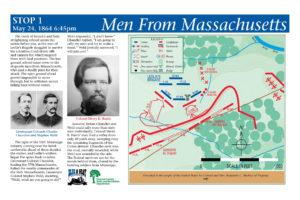 BGES helps direct visitors to the site with a full-color brochure that was developed and distributed from historical sites in Fredericksburg and locally through Richmond and the National Park system. To date more than 20,000 have been disbursed. BGES remains a committed partner to maintaining and sustaining the signs that are essential to an understanding of the battle site. BGES supporters have contributed more than $45,000 over the years to the presentation of the site.

This 1998 project—the BGES’ first—consisted of 10 signs for the interpretative trail leading to the Ox Ford Battlefield and the fight on May 25, 1864, between Grant’s surging army and Lee’s counter punching defenders. The signs were designed by park historian Michael Miller and approved by Ed Bearss. The signs were fabricated by Michael Beard of SunSyne Products in Johnson City, Tennessee.