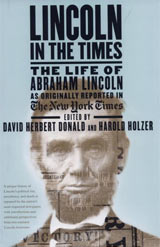 I was given this book by Vicki and Jerry Spier following my heart surgery in 2008. I just finished reading it and found myself wishing that I had picked it up as soon as I received it. While there are no shortage of monographs on Abraham Lincoln in and around his Bi-centennial commemoration this book was refreshingly simple and informative. Indeed with so much analysis of Lincoln filling the bookshelves it was a relief to look at Lincoln in the context of his actual life.

The idea is not a particularly novel one—indeed two giants of Lincoln scholarship, David Herbert Donald and Harold Holzer most likely found this relatively easy lifting. The premise of the book is to parse Lincoln’s life in the public view as it was reported by one of the nation’s great newspapers—The New York Times. As the editors agreed on an outline for the book each segment was introduced by short essay from either Donald or Holzer. The historians had the abundant good sense not to over analyze and indeed they showed sophistication that did them credit. The newspaper reports were powerful enough to preclude competition from the editors.

Donald is one of the nation’s most venerated and important historians—Pulitzer Prize and Lincoln Prize winner, this Harvard Don needs no introduction to Lincolnites. Holzer is a highly visible official with the Metropolitan Museum of Art in New York City and was the vice chairman of National Lincoln Bi-Centennial Commemorative Committee. He is also a Lincoln Prize recipient and author of numerous Lincoln monographs.

This book traces Lincoln’s rise to power and his performance as President of the United States during the Civil War. The most surprising and important aspects of the book are the numerous reports of Lincoln’s significant correspondence and speeches. Aside from the expected high visibility events we are treated to detailed analysis of issues such as the implementation of a Federal Income Tax to fund the War; the great debate over Emancipation; an issue of regulation of the nation’s banking system; the controversy and public discontent with the draft and its relationship to the state levies; there are frequent and critical commentaries on Lincoln and his abuses of Civil Rights, last but not least are the end of war issues such as the Hampton Roads Peace Conference and Lincoln’s visit to Richmond.

Collectively these pearls are meaty and informative. None disappoint and each give a sense of the country and its mood as the Civil War matures and ultimately plays out. This constitutes about 60% of the book; but the best starts on page 240 with the assassination. For the remaining 162 pages the reader is rewarded with coverage akin to that given John F. Kennedy’s assassination and funeral. Every detail of the event, the perpetrators and the funeral farewell are detailed in sometimes graphic language that helps the reader experience the grief and fury of a nation in mourning. The access granted the reporters to both the remains and the funeral party gave us the detail of the art of the mortician and the handling of the body as it deteriorated. We see how the police handled the crowds and the level of planning that went into the funeral honors and various viewings.

The book ends with the detailed treatment of the conspirators and the events up to and through the trial, imprisonment, execution and burial of the convicted murderers. It is a powerful treatment that singularly justifies the price of the book.

This book is past its primary selling period and may be hard to find; however, you will not be disappointed if you take the time and purchase a copy. Of the many books that have been published on Lincoln in the past few years that which is simple may very well be the best. It isn’t an award winner; but, it is very effective. I highly recommend the book.